by S-to-the-O & the Pacos feat. Loveladies 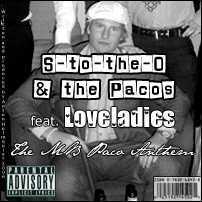 Written and produced by Anton Holmquist

[S-to-the-O]
We're the Pacos, y'all. The motherfuckin' MB Pacos, so don't you fuck with us!

[S-to-the-O]
You might have heard of us, you motherfuckas, the MB Paco ridahs
Slicker than you fuckin' wannabees, we're kickin' enemies
Unbeatable, and smokin' fuckin' hot, we tell you motherfuckas not to mess around with us MB's
so fuck these fools tryin' hard they're fuckin' never gonna beat us
Stayin' sharp at number one, fuckin' dancin' like Michael Jackson with the hunies and hoes,
with all the bitches so close. So motherfuckas watch out, we're gonna show you what it's all about

[S-to-the-O]
We bring you drama in no time, our shine leaves you all blind,
ya motherfuckas stay low fo' we're fuckin' ya slow
Better to accept and agree, we're top level, forever so be
The stars on the scene, doin' ladies like James Dean
The fuckin' M to the B, P-A-C to the O-S, god bless
In high excess we're fuckin' dealin' with success
Just like the Soviet Comrades, effective methods without warnin',
we're motherfuckin' alike, when we're producin' and performin'

Sing it now M! Sing it now B!
Sing it for the MB Pacos forever, sing it out loud
Cuz the Pacos are doin' them ladies
and the ladies love it

Sing it now M! sing it now B!
Sing it for the MB Pacos forever, sing it out loud
Cuz the pacos are shining for all time (for all time)